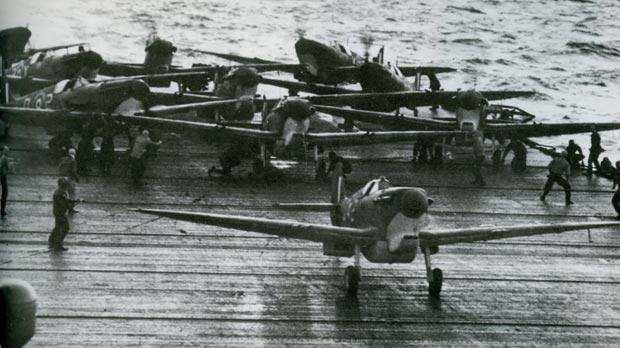 Malta’s air superiority held. The island was again not only a fortress but a weapon of far-reaching consequence in Mediterranean events. Only limitations of supplies could restrict the air offensive. It was clear that another operation on the lines of the August convoy was too great a luxury to be expected, except as a last resort. Reser¬ ves had to be kept in hand. At the same time the enemy must be prevented from sending his shipping lightly escorted by the direct route west of Malta. Egypt must be defended by weakening the Axis armies along their lines of communication.

These were the days when torpedo-carrying Beauforts, often escorted by Beaufighters came into their own. The Air Officer Commanding-in-Chief signalled to Malta on 20th August that he attached supreme importance to attacks on all south-bound convoys of enemy shipping in the next ten days. The convoys were attacked on most days by R.A.F. squadrons and frequently at night by the Fleet Air Arm aircraft based at Hal Far.

How successfully these attacks were conducted may be gathered from the entries in a log kept by one of the Beaufort Squadrons: ‘‘17th August: Six crews set out to prang one motor vessel and two destroyers south of Pantellaria. A successful operation, as the 6.000-ton M.V. was left well down in the water with smoke pouring out of it. One observer, who was wounded, had to extinguish a fire in his navigator's bag.

"21st August: Nine Beauforts attacked a 10.000-ton tanker (with escort of five destroyers) near Corfu. Three hits claimed, and Beau¬ fighters hit a destroyer with bombs. The tanker appeared to be stationary when last seen, and was emitting steam. Subsequent reconnaissance showed her beached, with a large patch of oil on the sea. Wellingtons tried unsuccessfully to ignite this oil with fire bombs. One crew lost. Beaufighter escort destroyed one Ju. 52, two Piaggio 32s, and two Br. 20s.

“26th August: Nine Beauforts attacked one M.V. of 6.000 tons escorted by one destroyer north of Benghazi. One torpedo broke ship's back, and subsequent hits set her ablaze from stem to stern. Escorting Beaufighter destroyed a Cant.

"30th August: Nine Beauforts attacked a 5.000-ton tanker and one destroyer south-bound from Taranto. The C.O.'s torpedo was seen to hit. A second hit caused the tanker to blow up and burn furiously. Superstructure was thrown high in the air. One pilot's prize moustache was endangered when he performed a "fly through fire" act at something like 250 feet. One Cant 501 was flying above the ship. There followed an example of mob violence of unequalled ferocity. All the escorting fighters and almost all the Beauforts' air-gunners popped away at it until it was left minus a float. The bewildered pilot must have had a very worried trip home.

6th September: Four motor vessels with escort of eleven destroyers, south-bound from Taranto, were attacked by twelve Beauforts. The intense flak and fighter attacks prevented the observation of results, but subsequent reconnaissance showed that one M.V. of 10.000 tons was sunk and another M.V. of 6.000 tons beached. All the Beauforts were attacked by fighters. Once again the Beaufighters saved the day. They bagged three, confirmed. One Beaufort shot down a Macchi 200."

Vigorous fighter action meanwhile led to a further decrease of enemy activity during August. There were one hundred and twenty-eight day alerts in July; in August the figure dropped to fifty-six. Seventy-three enemy aircraft came al night, compared with two hundred in July. In spite of these successes by Spitfires during day, by Beaufighters and the guns at night, Air Vice-Marshal Park had to continue to watch his fuel consumption. Al the end of the month he signalled to the Chief of Air Staff that during the week following the convoys arrival day and night fighters consumed less petrol than in any week during July or August, the bulk of it being used in strikes against shipping and by transit aircraft.

September brought an increase in shipping strikes, with 124 sorties. The enemy's trade route to Africa now crept down the coast of Greece and tended to dodge through the Corinth Canal rather than face attacks from Malta aircraft off the west coast of the Peloponnese. These were critical times for the two great armies facing each other across the El Alamein line.

But while Malta was sending Rommel's supplies to the bottom, and the strength of the Eighth Army was growing at El Alamein, the siege of the island grew more serious again. The Governor, Field-Marshal Lord Gori, signalled on 30lh September that, with the exception of aviation spirit and benzene, essential supplies should last until mid-December if no margin were allowed for any loss by enemy action. Flour stocks were still just sufficient to enable a first issue to be made for bread-making for the period ending 14th December. There was enough of the most important rationed commodities, sugar, edible oil, preserved meals and foods, to make the first half-monthly issues for December with a small margin left over. The Governor added that if the island should have to enter the first period of December without having received any substantial replenishments a position of great difficulty would arise.

During October photographic reconnaissances from Malta of enemy shipping followed the enemy's supply line from the heel of Italy down the Greek coast to Benghazi and Tobruk. Taranto and Brindisi were the main ports of supply and few convoys were seen attempting the route from Naples through the straits of Messina; Malta had rendered it too dangerous and costly.

Evidence of the success of attacks against Axis convoys was seen not only in the unloading of badly damaged merchantment at Corfu, Navarino and Homs, but also in the appearance of small and old- fashioned vessels upon the supply lines hitherto sailed by fast modern ships. Only one attempt to pass supplies down the western route between Malta and the Tunisian coast was seen during the month, and this convoy was attacked by the island's submarines.